Edit
watch 01:55
Cobra Kai Season 4 - The Loop
Do you like this video?
Play Sound

Michael Rymer
"Amuse-Bouche" is the second episode of Season 1, and overall the second produced hour of Hannibal. It originally aired on April 11, 2013.

Will and Jack hunt down a killer who is burying his victims alive so they will become fertilizer for his garden of fungus. Meanwhile, tabloid journalist Freddie Lounds targets Will.

Will Graham's deadly encounter with Garret Jacob Hobbs is still affecting him, seen when Jack Crawford wakes Will up from a bad daydream at the site of Hobbs cabin in Minnesota. The cabin is rustic and littered with animal parts in various states of decay, including upstairs where the loft is covered with deer antlers, almost from the floor to the ceiling. Jack informs Will about tips that Hobbs spent lots of time at the cabin with his daughter and wonders if she could be an accomplice? Will doesn't buy the theory, as Abigail is still in a coma from stab wounds her father inflicted. Nevertheless, Jack insists, pondering whether Abigail was the bait Hobbs used to reel his victims in.

Will is greeted with a standing ovation when he returns to his teaching post in Quantico. His class commends his takedown of Hobbs, but Will finds the celebration inappropriate. Alana Bloom approaches Will after class, urging him to attend a few psych evaluations as Garret Hobbs was the first person Will had ever shot. When Crawford arrives, he tells Will that he knows an experience like his can be traumatizing and arranges for Will to see Dr Lecter since he was there with Will when the shooting happened and therefore would understand.

At his first evaluation with Hannibal, Lecter tells Will he'll declare him totally functional and approve his immediate return to the field. With formalities aside, the two are able to engage in very candid conversation and they seem to share some common guilt in orphaning Abigail Hobbs. They realize they saved her life but are also burdened by the sense of obligation to look after her now. Will informs Hannibal about Jack's theory of Abigail's involvement in the murders and Lecter finds the notion vulgar, but entirely possible.

A new set of gruesome murders thrusts Will back into active duty. In a local forest, nine people are buried alive in shallow graves and kept in a catatonic state as a means of assisting in the growth of mushrooms. A tabloid blogger named Freddie Lounds shows up at the scene of the crime, who has been surreptitiously taking photos of Crawford and Graham's crime scenes and posting them on tattlecrime.com. Under the guise of a local mother just looking after the emotional well-being of her traumatized child, Freddie coaxes a low-level detective into giving her classified information about the investigation.

Will realizes he still hasn't conquered his trauma stemming from the Hobbs case and voluntarily undergoes another evaluation with Hannibal. Will says he hallucinated and saw Hobbs as one of the victims in the shallow graves and Hannibal chalks the incident up to simple stress and presses on about the case itself. Will says the "farmer" of these victims kept them alive by feeding them intravenous fluids; he's using them as fertilizer to grow fungi. Hannibal wonders if this murderer is obsessed with a fungi's ability to connect in ways the human mind can't and maybe that's what the killer's looking for, someone to understand him. Outside the office door, Freddie Lounds has been recording the conversation but when she comes in for her "appointment," Hannibal discovers her true identity and has her delete the recordings.

Hannibal invites Jack Crawford over for dinner and a discussion about Will's mental state but he can't resist the chance to delve into Jack's own psyche. Lecter wants to know why Jack is so delicate with Will and Jack tells Lecter he's already had his psych evaluation. Back at the FBI autopsy room, Will is informed that all the victims in the forest died of kidney failure. When one of the specialists mentions the use of sugar water in each victim's catheter, Will realizes they were all diabetic and that in order to place them in comas, the murderer must have changed their medication meaning he had access to their pills.

Crawford discovers that 10 diabetic customers of a chain pharmacy in one Baltimore county have all gone missing in the past few weeks, the last two from the same location and that only one pharmacist in the area works at multiple stores. Jack, Will and a SWAT team move in but the pharmacist is gone and when Will searches his car in the parking lot, he finds a body covered in dirt in the trunk but she's still breathing. When investigators search the pharmacist's browser history at his workstation, they realize he's been reading Freddie Lounds' tabloid blog and that she'd recently posted an article with details on Will Graham's unstable mind. In his office, Hannibal reads the same article.

Police storm Freddie's motel room and cuff her as the article tipped off the killer and allowed him to narrowly escape their hands. Jack threatens to charge Freddie with obstruction of justice but when she agrees to stop writing about Will, he lets her go. Elsewhere, at Johns Hopkins Hospital, Alana Bloom wakes up a sleeping Will as she reads a book to the comatose Abigail Hobbs. Alana asks Will about Freddie's article but he doesn't want to talk about it. Alana tells Will he should view his connection to Abigail as a success and that he saved her life.

Later on, when Freddie leaves her motel room, the local detective she misled stops her as he's been suspended and is furious with her deception. She tries to placate him by offering him new work in private security but before she can finish her offer, the pharmacist suspect, whose name is Eldon, comes out of nowhere and shoots the detective in the head. Eldon, showing no signs of emotion, let's Freddie know he read her article.

Jack finds Freddie in an ambulance at the scene of the crime. She's a wreck but is coherent enough to tell Jack that Eldon the pharmacist is now looking for Will Graham; he thinks only Will can understand him. Jack asks Freddie what she divulged to Eldon and she says she told Eldon everything, including the location of Abigail Hobbs.

At Johns Hopkins Hospital, Eldon has disguised himself as a nurse and is headed for Abigail's room just as Will arrives. Jack calls Will to tell him of Eldon's plan and Will draws his pistol and sprints towards Abigail's room but she is gone. The nurses on the floor tell Will she was taken for tests but they are not sure who took her and Will realizes Eldon has her. Will catches Eldon just as he's wheeling Abigail out of the building. Without hesitation, Will fires one shot into Eldon's shoulder, debilitating him while keeping him alive. Eldon implores Will to understand his plans but Will tells him he doesn't understand - and he never will.

Back in Hannibal's office, Will is continuing to rehab his own psyche. Hannibal asks if he saw Hobbs when he shot Eldon. When Will says it wasn't Hobbs he saw, Dr. Lecter knows that what is truly haunting Will is the rush that comes from killing a man. Will resists the notion, but eventually admits he liked killing Hobbs and Hannibal says it makes one feel powerful. 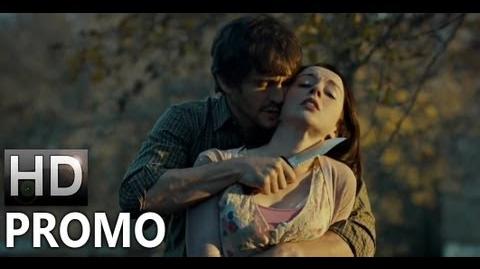 Loin, Episode 2: While Hannibal's supposed "pork" loin might be the most

familiar, and therefore one of the least disturbing, dishes served, Fuller has a very different take. "There's something

about the flesh of our backs being served up to Hannibal's guests being something so disturbing because it's coming at us from behind," Fuller said. "In my fandom for horror movies there's no greater scene than seeing a character and seeing something horrible coming up from behind that you see before they do. And so this loin dish is kind of an homage to

Why veal? Because, according to William Seabrook, that’s what human flesh tastes like. Back in the 30s, he was a reporter for The New York Times and, in researching cannibalism, asked a friend who was interning at the Sorbonne to procure for him a piece of healthy human flesh. He cooked it up and promptly declared it to be stringy but delicious – and tasting exactly like a good piece of veal. So instead of the pork that Hannibal claims he is serving to Jack, we are substituting veal. With zeal. To the kitchen! serves four