Bryan Fuller     is an American screenwriter and television producer. Fuller has worked exclusively as a writer/producer in television, creating a number of critically acclaimed television series, including Dead Like Me, Wonderfalls, Pushing Daisies and more recently, Hannibal.
He was born in Lewiston, Idaho and raised in Clarkston, Washington. After graduating from Clarkston High School, Fuller attended Lewis–Clark State College in Lewiston, Idaho. He later transferred to the USC School of Cinematic Arts, but dropped out and began working as an office temp for the next five years. 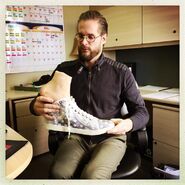