Start a Wiki
"Coquilles" is the fifth episode of Season 1, and overall the fifth produced hour of Hannibal. It originally aired on April 25, 2013.

Will Graham and the BAU team track a serial killer whose bloody ritual includes cutting the victims' back flesh and stretching it to look like angel wings. Returning to the field weighs heavily on Will's psyche and Hannibal tries to drive a wedge between Will and Jack. Meanwhile, Jack Crawford's wife Bella pulls away from him and begins seeing Hannibal as her therapist, in an effort to come to terms with the fact she is dying. Beverly tries to connect with Will on a more personal level.

An unnerving bout of sleepwalking ends with Will walking down a deserted stretch of Northern Virginia back road in the middle of the night proves serious enough for Will to visit Dr Lecter. Hannibal thinks this new disorder in Will is an offshoot of post-traumatic stress, from his recent emotionally intensive cases. Jack Crawford, in Dr. Lecter's eyes, hasn't been the most scrupulous boss when it comes to handling Will's expertise, and it's beginning to take its toll...

Will and Jack are called to a grisly motel murder scene. Inside a room registered to "John Smith," Will finds two murdered bodies - a naked man and woman - displayed with fishing wire at the foot of the bed. They're both in a traditional prayer position, and the flesh on their backs has been mutilated and hung to look like wings. The murderer slept in the bed after committing his crime and threw up on the nightstand before leaving. Will asks for a plastic sheet and prepares to get inside the mind of this madman.

Later, Jack Crawford and his wife Bella share a beautifully crafted meal at Hannibal's house. When Hannibal delivers a foie gras course, Bella politely declines on account of her moral stance against the dish's cruelty. Hannibal assures her that he is staunchly opposed to animal cruelty, as it's one of the first signs of a sociopath. No, Hannibal Lecter prefers ethical butchery.

At the Quantico forensics room, Beverly Katz and Brian Zeller attempt to figure out the motives behind this murderer's positioning of his victims. They assume he wanted to feel like God, but Will suspects something else. After running a test on the man's vomit, forensics finds signs of steroids and anti-convulsants. The vomit was from radiation - the murderer has brain cancer. Will now knows, this killer fears death and makes angels out of his victims to pray over him while he sleeps.

Bella Crawford makes an appointment with Hannibal Lecter and questions whether she should be seeing someone so close to her husband.  Her affirmative responses to his questions seem to imply she's hiding something crucial, but she has no intention of telling Jack. As Hannibal prods, Bella says Jack is so stressed out with his work, he can't spend time thinking about her. She half-jokingly suggests Hannibal be their couples' counselor, but it's his turn to remark he's too close to Jack.

Later, Will Graham stops by Dr. Lecter's office to converse about his latest case. Hannibal attempts to offer his guidance with this "angel-maker," but seems more interested in subtly alienating Will from Jack.

Jack Crawford knows things aren't alright between his wife and him, and when she comes home late, he tries to air out the problems in their relationships; Bella would rather not, she's just overwhelmed with work - that's all. Jack suspects there is someone else, but doesn't insult her by positing the question. He simply says he loves her, and though racked with guilt, Bella returns his affirmations.

Will is called all the way to Cleveland, Ohio, where a murdered body is hanging from a scaffolding in a downtown alley, the flesh of its back displayed like wings. Will knows this man's obsession with angels isn't biblical - since the angels in scripture don't have wings. His mind has turned against him and there's no one there to help. On the ground, forensics finds male genitalia - and Will realizes their killer castrated himself. He's accepting the idea of death and is preparing to become his own angel. Jack continues pressing Will, but in a moment of anger Will lashes out and tells Jack to find his own answers. Hannibal's influence is affecting Will.

Back in forensics, Beverly Katz tell Will she's never seen anyone confront Jack like he did in Cleveland. She wonders if he's all right, but Will continues to mask his emotions. The demands of his job are damaging Will's psyche, but he'd rather not reveal that information to his coworkers. Jimmy Price comes in with some interesting information: the first two victims were wanted criminals, one for rape and the other for watching. This killer is carefully choosing his victims; he thinks he's doing God's  work.

Bella visits Hannibal again, informing him of Jack's recent suspicions of her infidelity. Hannibal finds Bella a tough one to crack, and things become more complicated when she admits the lung cancer spreading in her body. Bella knows the cancer is pulling her away from her husband, and in a way, hopes her distance might lessen the blow when she passes. Hannibal sees Bella as doubling the eventual pain for Jack, a man who's loved her for so long. Their relationship may be eroding and Bella may have cancer, but Dr Lecter doesn't know if it's fair to place the blame on Jack.

Will has another anxious bout of sleepwalking - this time he wakes up on the roof of his home. In Hannibal's office, he brings Dr Lecter up to speed with the "angel-maker" and his newly found messianic complex. Will thinks he's just a man, whose brain is playing tricks on him. Hannibal sees a connection to Will and his sleepwalking. But even though this angel-maker will be destroyed by what's happening inside his head, Hannibal knows Will has a choice to let his anxieties consume him. Hannibal surreptitiously smells Will, but Graham notices and is disconcerted. Hannibal has an amazing sense of smell and suggests Will change his after-shave; it might be affecting his sleep patterns.

Brian Zeller comes to Jack with the identity of their angel-maker suspect; his name is Elliot Budish. Jack interviews Elliot's ex-wife, Emma, who left Elliot because of his cancer. It sounds horrible but he kept pulling away from her and at a certain point, there was nothing she could do. Jack realizes the stark similarities in their two relationships and begins to worry about his wife Bella. Will asks Emma if her husband was ever violent, but she says no. He was angry, but he never acted on it. When Jack tells Emma they just want to find Elliot before he hurts himself or someone else, she says Elliot died once as a child - he suffocated in a fire but was resuscitated at the scene. The fireman said he must've had a guardian angel. Will sits up, and asks where that happened...

Will and Jack visit the farm in which Elliot's life-or-death experience occurred as a child, where they find Elliot Buddish dead, hanging from the rafters, angelic like his previous victims. This will be the last one. The failure to catch Elliot weighs on Will. He doesn't know how long he can go on with this job - it's killing him, and it's getting increasingly harder to get inside the minds of these killers. Jack says Will doesn't have to do it alone, but Will knows that's exactly what he has to do. Jack offers an ultimatum before walking back to the car - if he wants to quit, quit. Will ponders this before turning back to look at the hanging body, except it's gone... Elliot's standing right next to him. Elliot falls to the ground, and stammers to say, "I see what you are, and I can bring it out of you." Will places his hand on his gun and then snaps out of his hallucination. Elliot's body is still hanging from the rafters.

Later, Jack confronts his wife at Hannibal's office following her appointment. Jack has deduced Bella's condition and asks if it's treatable... but Bella replies her lung cancer is in stage four, and there aren't five stages. Jack hesitates to ask whether she wants to be alone, before remarking that he doesn't want her to face this alone, and he's not going anywhere. Bella appreciates his sentiments, but she can't give Jack the comfort of knowing he has comforted her. Jack sits heartbroken as Bella's hand lingers in his.

At FBI headquarters, Will pays Jack a visit in his office. Will sits down and says he's not going anywhere until Jack is ready to talk. Jack and Will sit together in silence, pondering their work and its effect on their personal lives. Will's psyche may be irreparably damaged in search of this Chesapeake River Ripper, and Jack's been so busy he only just found out about his wife's terminal cancer. Together they sit in silence, weighing the value and necessity of their work... 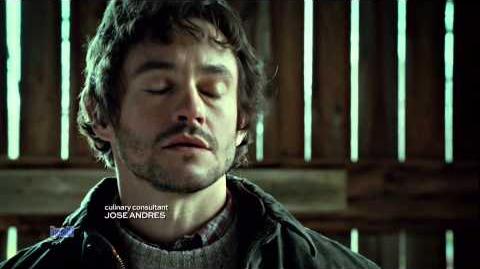 Foie gras, Fuller and Andres' collaboration goes far beyond the dishes Hannibal serves to his unwitting guests. In addition to selecting wines and even providing a signed copy of famed French culinary guide Escoffier to use as a prop, Andres gives crucial input to help shape the dialogue and inspired a conversation about foie gras, a delicacy that requires the force-feeding of ducks and geese to create a fattier (and tastier) liver.

"In [the script for Episode 4], I suggested that one of the talks had to happen to show how food-intellectual Hannibal was," Andres said. "You know, bringing the conversation about, 'Is foie gras humane or inhumane?'" Though he added that when discussing human foie gras, "the answer is obvious." |-| </tabber>

Retrieved from "https://hannibal.fandom.com/wiki/Coquilles?oldid=27395"
Community content is available under CC-BY-SA unless otherwise noted.