Count Lecter (also known as Father Lecter[1]) was a character in Hannibal Rising and the father of Hannibal and Mischa Lecter. Along with his wife Simonetta Sforza-Lecter, they raised their children during 'World War II and lived in Lithuania throughout its duration. They took residency in the Lecter Castle an estate belonging to the Count, until 1944 when they were forced to leave their home to escape the war.

Count Lecter led his family along with servants and others to a cabin the family held far off from the property. It is here that they settled for some time, until a Soviet tank trampled through the woods aiming its turret at the cabin. The Count and Lothar exited the cabin, followed by Simonetta, their Nanny and his two children. The Soviets desired water for their trip, lining up the adults outside next to the tank while the children were permitted to stay in the lodge. It was then that three German bombers flew overhead and a battle broke out, with the gunner on the tank aiming at an approaching plane blasting it with the gun-turret.

While the fighting commenced, the Count had Lothar keep his wife close to the ground shielding her while he ran to the cabin to protect his kids. Before he could get past the tank, the incoming plane's bullets pierced through his back and he fell to the ground dying. Before his death, he looked up to young Hannibal that screamed "Papa! Papa!" and reached his hand out before he died in the grass.

His servants were killed in the battle and his wife died shortly thereafter, with his daughter later cannibalized and his son going on to seek revenge as well as become one of the most infamous serial killers in history. 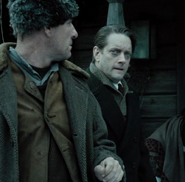 The first of three shots that kills the Count.

Last look towards his children.

Add a photo to this gallery

Retrieved from "https://hannibal.fandom.com/wiki/Count_Lecter?oldid=21737"
Community content is available under CC-BY-SA unless otherwise noted.