Michael Rymer
"Entrée" is the sixth episode of Season 1, and overall the sixth produced hour of Hannibal. It originally aired on May 2, 2013.

Jack and Alana are contacted by a former colleague, Dr. Chilton, who believes he has the Chesapeake Ripper in custody, but then one of his patients commits a murder that matches the Ripper's profile. The team determines that the Ripper was a surgeon and is still at large when young Miriam Lass becomes the next victim. By opening up to Hannibal, Jack copes with the loss of his young protégé and with the prospect of losing his wife.

Dr. Abel Gideon lies unconscious on the floor of his maximum-security cell in the Baltimore State Hospital for the Criminally Insane. Transported to an emergency room, a nurse rushes to revive Dr Gideon and stabilize his vitals, but he picks the locks of his handcuffs and frees himself. Will and Jack are called to the scene, where they meet a doctor in the facility. Dr Gideon has

been placed back in his holding cell, but his murder of the nurse is beyond gruesome. Will finds the dead nurse lying on a gurney, privacy poles protruding out of her in all directions like spears. The in-house doctor tells Will he thinks the reason they failed to catch the Chesapeake Ripper was because they already had him.

In his head, Will Graham envisions the exact way in which Dr Gideon killed his nurse. Gideon's been in custody, so Will knows he hasn't killed anyone on the outside for at least two years.

Flashing back, Jack realizes the timelines converge around the

same time he lost his best young trainee, Miriam Lass. She might've been the last one Gideon killed before his incarceration.

Alana Bloom meets with the hospital's Dr Chilton about Gideon, as she plans to interview him soon to study his mind. Alana's researched Gideon in the past, but Dr Chilton lets her know Gideon seems to be very familiar with her - Gideon's given her a lot of thought.

Alana Bloom sits down and conducts an interview with Dr Gideon, who is behind not only bars, but also a bulletproof glass enclosure. Gideon doesn't understand what she hopes to gain from speaking to him, since it's obvious he did it. Alana begins to inquire into Gideon's motivations for the crime and he replies that the effect he was aiming for was the nurse's death, joking "Mission accomplished". When Alana calls into question Gideon's claim of being the Chesapeake Ripper, since the Ripper usually brutalizes his victims during - not after - Gideon says he doesn't need to prove anything to her. Bloom thinks that's exactly what he needs to do.

Jack makes an unexpected visit to Hannibal's office. His wife won't open up to him about her struggle with cancer, and Jack hopes Hannibal will help fill him in. But Dr Lecter must respect his patient confidentiality agreement and reveals little more than a basic comfort - telling Jack his wife still loves him. Jack thinks about her pending death constantly and is broken up about it. Hannibal sees this as a dreading of loss.

In a flashback, Jack relives a memory of his lost coworker Miriam. They investigated the Chesapeake Ripper case together, and Jack encouraged Miriam to go after the serial killer with everything she had.  Back in Hannibal's office, it's clear Jack still harbors regret for putting his pupil in the line of fire.

In forensics, Will questions the assumption that Dr Gideon is the Chesapeake Ripper - the nurse murder has the look of a Ripper crime, but it doesn't have the feel... Will thinks this is plagiarism.

Later that night, Jack is awoken from his sleep by a shocking call from Miriam, begging for his help. Jack tells the forensics team about the call, and everyone expresses skepticism, since Miriam's been presumed dead for two years. Jack thinks Will's plagiarism theory is accurate and that the real Ripper recorded Miriam's voice two years ago and played it back for Jack last night to taunt him. But Will isn't convinced; after all, Miriam's body was never recovered...

Jack comes up with a risky idea that might force the Ripper to make a careless maneuver and reveal himself to the FBI. Right now Dr Gideon is just "rumored" to be the Chesapeake Ripper, but if they used Freddie Lounds to confirm Gideon as the infamous killer, the real - and still elusive - one might act out to regain the spotlight. Will thinks this strategy might just cause an otherwise avoidable death, but the FBI brings Freddie in anyway and pitches her the idea. They want her to confirm her previous report of the Ripper's identity being Dr Gideon, and in return, they'll help make sure her byline is featured in every major newspaper around the country. Freddie ponders the purpose, but ultimately can't resist the notoriety. As part of her deal with the FBI, Freddie Lounds interviews Dr Gideon behind bars and posts her official confirmation article online hours later.

In his office, Hannibal reads Freddie's blog with a sense of unspoken knowledge in his eyes.

Later, with Jack, Dr. Gideon still won't back off his

claim of being the Chesapeake Ripper, explaining the surgical trophies because "There are some things you just can't do in a state-certified operating room". Gideon admits to killing Miriam all those years ago, though he tells Jack he never meant to; when Jack asks why Gideon didn't put her on display, Gideon doesn't know what makes Jack think he didn't. Suddenly, Jack's phone rings and Miriam's same, recorded call begging for help plays again...

Forensics traces the cryptic call back to Jack's home, and a crime scene investigation reveals the Ripper was all over Crawford's bedroom. There are prints everywhere and even a stray hair resting on the pillow of Jack's wife. He is furious - the taunting is one thing, but the invasion of privacy, the presence in his own bedroom, is too much to handle. When Brian Zeller runs the prints, he stops dead in his tracks. The national database has them as Miriam Lass' - she was the one in Jack's bedroom. But that can't be... she's been dead for two years.

Alana Bloom and Dr Chilton converse over dinner with Hannibal at the doctor's home. Bloom wonders aloud if Dr Chilton inadvertently planted the idea of Dr Gideon being the Ripper into his own, psychotic patient's mind. Perhaps his persistent pressing of the issue led his inmate to assume the identity for himself. Chilton strongly disagrees with this statement; Dr Gideon is definitely the Ripper. Alana asks if she can interview Gideon one more time, just to make sure, and Chilton allows it.  In the kitchen, Hannibal tells Dr Chilton he would've done the same thing if he were in his situation, using psychic driving on an inmate. Chilton is offended by the implication.

Alana sees Dr Gideon as a manipulated inmate and offers to help him out, if he promises to be trustworthy with her moving forward. In the waiting room, Will Graham and Dr Chilton get to know each other while they wait for Alana to finish her interview. Back in the cellblock, Dr Gideon says he doesn't need Alana's help.

Alone with Hannibal, Jack thinks the Ripper is using the bait of Miriam being alive as a means of clouding his judgment with the prospect of hope. Hannibal encourages Jack not to lose hope in his wife - she's lost it, which means he needs to be optimistic all the more.

Dr Lecter then asks Jack to tell him about Miriam, but in a flashback, it's revealed that Miriam once went to Hannibal during her investigation to inquire about the Ripper. Hannibal may have a connection to a recent victim. When Hannibal offers to check his notes on the second floor of his office, Miriam peruses his desk and notices a sketch that perfectly resembles the victim's wounds in the most recent crime. Realizing Hannibal's the Ripper, Miriam panics as Hannibal grabs her and strangles her.

Will and Beverly follow up on the latest call from Miriam made to Jack's phone. In an old, abandoned observatory, Will and Beverly discuss Miriam's final whereabouts, and how she was investigating surgeons related to the

Ripper's victims. Jack says Dr. Gideon wasn't the one who was in his bedroom, and reveals his latest taunting call came affixed with an actual number.  When Jack calls back, the phone is heard ringing within range.  Will, Jack and Beverly enter the observatory and find a severed arm holding the phone used to call Jack.  Next to the arm is a card, with the words "What Do You See?" written on it... 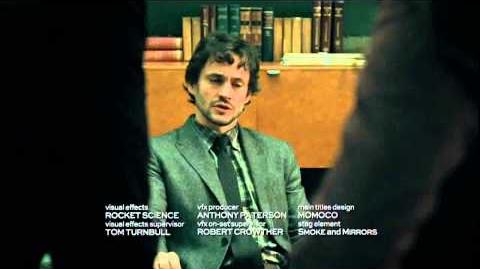 Tongue: When Fuller was wondering which choice cut Lecter might serve the annoying sanitarium director Dr. Chilton, it was Andres who suggested tongue, based upon the knowledge that the ancient Romans used to

consume flamingo tongues. But tongue wasn't the only body part being served up that night. Viewers have

to look very closely (and exercise quite the twisted imagination) to puzzle out all the cannibalistic dishes Hannibal cooks up throughout the series, or else some delicacies will fly right by. "We had bone Jell-O in [Episode 5]," Fuller said. "That's something that I'll tweet about as it's going on, but I don't wanna put too much of it in the show, because it's an extra and it's kind of fun for people who are following live."