The Wrath of the Lamb

Francis Dolarhyde is a character in NBC's Hannibal and is the main antagonist of the second half of the third season.

Francis Dolarhyde was abandoned by his mother and raised by his abusive grandmother. He was born with a cleft lip and palate, for which he was severely bullied and abused by other children and his own family. While he eventually had cosmetic surgery to correct his birth defect, the abuse he suffered as a child molded him into a psychopath with a split personality.

Whilst sitting in a cafeteria, Dolarhyde read a copy of TIME magazine which featured a story about William Blake's painting The Great Red Dragon and the Woman Clothed With the Sun. He is fascinated by the painting, which gives voice to his other personality. He has the Great Red Dragon tattooed on his back. He begins to work out and has custom made jagged-dentures created. Dolarhyde keeps a copy of the painting in his attic where he works out.

At the behest of his "Great Red Dragon" personality, Dolarhyde begins murdering - or "changing" - entire families in order to fully "become" the Dragon, beginning with Thomas and Theresa Marlow and their children. He kills on a lunar cycle, claiming new victims every month on the full moon. He also idolizes Dr. Hannibal Lecter, and reads stories in the National Tattler about Hannibal's crimes as "The Chesapeake Ripper". He calls Hannibal, institutionalized in the Baltimore State Hospital for the Criminally Insane, and asks his advice. Hannibal praises Dolarhyde, and provides him with Will Graham's address. Dolarhyde then attacks and wounds Graham's wife Molly and stepson Walter, though Graham is able to save them. Dolarhyde then kidnaps, mutilates, and burns Hannibal's jailer, Dr. Frederick Chilton.

Meanwhile, Dolarhyde falls in love with Reba McLane, a blind coworker. The Dragon becomes jealous and threatens to kill her, prompting Dolarhyde to travel to the Brooklyn Museum and eat the original Blake painting, in the hopes that it will destroy his other self. This act of defiance only makes the Dragon angrier, however, and it once again demands that Dolarhyde kill Reba. By now, Graham and Jack Crawford have zeroed in on Dolarhyde, who kidnaps Reba and threatens to kill her and himself. He can't bring himself to kill her, however, so he shoots the corpse of one of his other victims to make her believe he is dead.

Soon afterward, Dolarhyde attacks Will, who tells him to kill Hannibal. Dolarhyde attacks a police convoy carrying Hannibal to a new prison facility, unaware that it is a trap. He kills the guards, but spares Will and Hannibal. He follows them to a beach house where Hannibal had earlier taken Miriam Lass to condition her to attack Chilton. Dolarhyde shoots Lecter and stabs Graham in the face. They get the better of Dolarhyde, however, and kill him together: Will stabs him in the chest, and Hannibal tears his throat open with his teeth.

Dolarhyde is a deeply disturbed man with a long history of familial abuse. His split personality reflects that abuse: As himself, he is shy and insecure; as the "Dragon", he is confident and ruthless, killing entire families to achieve his “becoming”. Dolarhyde proves himself highly intelligent in the planning and execution of his murders, leaving little evidence. He is also an expert marksman, making multiple headshots with minimal errors. Dolarhyde is physically strong and a skilled fighter, almost killing Will and Hannibal in combat before they overpower him. 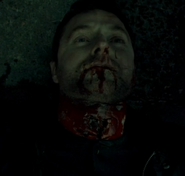