View source
watch 02:56
Doctor Strange in The Multiverse o Madness - The Loop
Do you like this video?
Play Sound

The Wrath of the Lamb

This article is about the television series version of the character. You may be looking for the character from the novels and films.

Dr. Hannibal Lecter is the titular main antagonist of the NBC show Hannibal.

Hannibal is a psychiatrist who works with Special Agent Will Graham to track down serial killers. Unknown to his colleagues, Hannibal is a cannibalistic serial killer known as the Chesapeake Ripper, who works behind Graham's back to further his own crimes. However, he sometimes uses them for other purposes such as committing two murders as a 'copycat' of the crimes of Garret Jacob Hobbs to present Graham with a clearer picture of the true killer's motives.

Hannibal Lecter was born in Lithuania to Count Lecter, a Lithuanian aristocrat and Simonetta Sforza-Lecter, an Italian mother. Orphaned at a young age, Hannibal became something of a father figure to his younger sister Mischa, after their parents died. Mischa was one of the few people in his life that Hannibal would ever truly love, caring about her so much that he denied his early homicidal tendencies for her. Under unknown circumstances, Mischa was killed and Hannibal ate her remains as a way of forgiving her for making him deny his true self. At the age of 16, he was adopted by his uncle Robertus and his aunt, Lady Murasaki.

Hannibal became very close to Murasaki’s handmaiden Chiyoh and they began to think of each other as family. Hannibal eventually found the man that was believed to have killed Mischa and wanted to kill him, Chiyoh however, managed to dissuade Hannibal from doing this and so he decided to leave the man’s life in Chiyoh’s hands. Chiyoh decided to keep the man a prisoner under Castle Lecter as punishment.

Sometime after leaving Castle Lecter, Hannibal journeyed to (and lived within) Florence,[1] which is where he first began his career as a serial killer. He crafted his victims into images that were described as “haunting”, Hannibal‘s work eventually caused him to be given the name “Il Mostro di Firenze" translated as “the Monster of Florence”. Hannibal was considered a suspect in the crime by inspector Rinaldo Pazzi but despite a search of his home, no evidence could be found that connected Hannibal to these crimes. Eventually, another man was convicted of being Ill Mostro, simply because of his character and Hannibal soon after left Florence.

Hannibal came to America after receiving an Internship at John’s Hopkins medical school because of his drawings. Hannibal studied to become an M.D but eventually chose to leave the field of medicine in favor of becoming a psychiatrist. Hannibal used his position of power to persuade some of his more susceptible patients into committing murders, mostly because he was curious to see what would happen. Hannibal also continued killing people, preferring to kill those he deemed as ”rude” because they were no better than “pigs” to him. Hannibal became known as the Chesapeake Ripper, a serial killer that would mutilate his victims while they were alive and surgically remove their organs so he could cook them, preferably when he was hosting a dinner party.

Hannibal took a keen interest in Graham, whom he sensed to be similar minded. Despite his homicidal nature, he appears to have a certain empathy for others on some occasions. During his first case with Graham, he assisted Graham in saving Abigail, Garret Jacob Hobbs' daughter.

He despises banality and has an acute love of fine arts, food, literature, and music. He is depicted as a man of taste and details, and a nearly-obsessive perfectionist. He takes an instant dislike to "rude" people, such as Fredricka Lounds. Hannibal is very particular about what he eats, most of his meals are self-prepared. He claimed once that he does not believe in cruelty to animals and only purchases meat from ethical butchers, although this may have just been an abstruse joke about his true appetite. While talking with Abel Gideon, Hannibal noted that he did not consider himself a 'cannibal' as that implied eating one's equals, reflecting his usual standards of only eating those he considers inferior in some regard while leaving those he respects relatively alone.

He has a very good sense of smell, evident in how he often identifies Will by his aftershave before he even enters the room. He claims that when he was younger, he was aware of his teacher's stomach cancer, even before he was.

Hannibal also frequently holds small and extravagant dinner parties for his colleagues and friends. His guests have included Will, Alana, Dr. Chilton, Jack Crawford, and Jack's wife, Bella. While they seem to enjoy the elegant meals, they are unknowingly consuming Dr. Lecter's victims. Will Graham and Dr. Chilton eventually figure this out, with great disturbance.

Lecter also has an unconventional psychiatrist, who happens to be his colleague, Dr. Bedelia Du Maurier.

As the Chesapeake Ripper, Lecter kills in sounders (referring to a small group of pigs) of three. That is how he sees his victims, not as people, not as prey, but as pigs. Though crime scene photos show that his exact method varies, his victims are killed and mutilated by cutting, sometimes dismembered, and what remains of them is left on display and posed in various theatrical ways; one of the most frequently mentioned ways was when the Ripper left a victim near a church pew and used his severed tongue as a page marker in a bible he was reading. He also removed and took with him certain organs from the victims, usually while they were alive, which he, unbeknownst to the FBI, consumed.

He killed his first victims in nine days: Minneapolis, Essex, and Baltimore. He didn't kill again for eighteen months, and there was another sounder of three, and, in as many days, all of them in Baltimore. Eleven months after the sixth victim, there was a seventh.

Two days later, the eighth, Jeremy Olmstead, was killed in his workshop. Every tool on a pegboard was used against him, and, as with previous murders, organs were removed. Removal of organs and abdominal mutilations showed someone with anatomical or surgical skills.

F.B.I. trainee Miriam Lass was investigating private medical records of all the known victims when she disappeared. She was believed to be the Ripper's ninth victim.

No trace of her was found until two years later when her severed arm was discovered only because the Ripper had wanted it to be found. True to his established pattern, the Chesapeake Ripper has remained consistently theatrical.

The Ripper has also killed independent medical examiner Andrew Caldwell, a Customer Service representative with Stanwood Tailored Coats named Michelle Vocalson, Hidden Room Rare Books General Manager Darrell Ledgerwood, and an IT consultant named Christopher Word, all names chosen at random from his collection of business cards (which he previously collected from people whom he found rude). At the time the FBI was unsure which of the murders to attribute to the Ripper or the organ seller. After each killing, he uses the organs to create extravagant meals for his friends. In the episode, "Sorbet", he kills an additional five people.

While Lecter primarily kills as the Chesapeake Ripper, he has frequently murdered as a copycat killer, using his behind-the-scenes knowledge to copy other murderers and sometimes frame others for the crimes.

Hannibal eventually framed Will Graham for the murders of Cassie Boyle, Marissa Schurr, Donald Sutcliffe, Georgia Madchen, and Abigail Hobbs. He did this by breaking into Graham's house, dismantling some of his home-made fishing lures, then re-constructing them integrated with remains from the victims. He later takes credit for all the murders when he kills a guard to get Abel Gideon and uses fishing lures identical to the ones used to frame Will with DNA of previous and new victims confirming the Copycat Killer and Chesapeake Ripper are one and the same.

Hannibal's activities in Europe are under the guise of "Il Mostro di Firenze", Italian for "The Monster of Florence".

Twenty years ago, Hannibal arranged a crime scene to look like a detail from Botticelli's Primavera. Chief Investigator Rinaldo Pazzi determined that Hannibal was the killer, but was unable to prove it. Instead, someone else was arrested for the crime, though there was no evidence except for his poor character.

Hannibal returned to Italy with Bedelia after his true nature was revealed in Baltimore. Since his return, he killed and assumed the identity of Dr. Roman Fell, and has resumed his activities as Il Mostro.

Abigail: "How many people have you killed?"
Lecter: "Many more than your father." 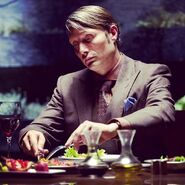 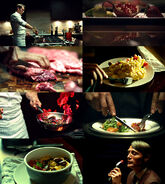 A portion of Primavera with Will and Bedelia

Will as Zephyrus on Primavera