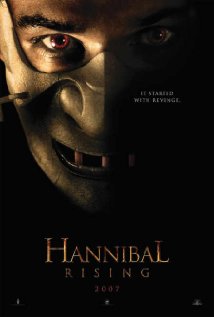 Hannibal Rising is a 2007 film based on the 2006 book of the same name by Thomas Harris. It is the origin story of Hannibal Lecter and, therefore, a prequel to films Manhunter/Red Dragon.

After the death of his parents during World War II, young Hannibal Lecter moves in with his beautiful aunt and begins plotting revenge on the barbarians responsible for his sister's death.

In 1941, eight-year-old Hannibal Lecter, living in Lecter Castle; constructed by his paternal ancestor, Hannibal the Grim, in the Lithuanian countryside, escapes with his younger sister Mischa and their parents Herbert and Simonetta to the family's hunting lodge in the woods to elude the advancing German troops. Back at Lecter Castle, six Lithuanian militiamen (Vladis Grutas, Petras Kolnas, Enrikas Dortlich, Zigmas Milko, Bronys Grentz and Kazys Porvik) request to join the Waffen-SS. The SS commander orders them to kill the Lecters' Jewish cook who was left behind, to which they gleefully comply.

A Soviet tank stops at the Lecters' lodge looking for water, and forces everyone out of the house. However, the tank is then spotted by a German Stuka bomber, which sparks a firefight. The bomber is shot down by the tank, but subsequently crashes into it and the ensuing explosion kills everyone, except Hannibal and Mischa. The SS militiamen then loot Lecter Castle. Seeing their wounded SS commander, Grutas shoots him and takes his Iron Cross. However, the impending Russian advance forces them to hide out in the woods where they locate the Lecter lodge. The SS militiamen storm and take over the lodge. Finding no other food in the bitterly cold Baltic winter, the men look menacingly at Hannibal and Mischa.

The movie then cuts to a scene eight years later inside Lecter Castle, which has been turned into a Soviet-run orphanage. A bully harasses Lecter, who has been rendered mute by his experiences, about not singing the orphanage anthem. The bully attacks his head, but Lecter blocks his swing with a fork, impaling the bully's hand. That evening, Lecter experiences a flashback about Mischa screaming in his sleep, which angers the youth commander, who locks him in a dungeon. However, Lecter escapes from the castle orphanage to Paris to live with his widowed aunt, the Lady Murasaki Lecter. She gets him to speak for the first time since his childhood, and instructs him about flower arrangement, martial arts and ancestor worship.

At a local market, a butcher named Paul Momund makes a crude and racist remark about Lady Murasaki. Lecter then attacks him. Later, while Momund is fishing, Lecter requests an apology from him, and is denied. He then slices the butcher's stomach, arm and back with a katana, then decapitates him. Later that evening, the family cook tells Lecter that the most delicious part of the fish is the cheeks. That same evening, he is suspected of the butcher's murder by Inspector Pascal Popil, a French detective who had also lost his family to the war. Thanks in great part to the intervention of his aunt, who places the butcher's disembodied head outside police headquarters while Hannibal is being interrogated inside, Lecter escapes responsibility for the crime.

Eventually, Lecter becomes the youngest person ever admitted to medical school in France. He receives a working scholarship, where he is given a job preparing cadavers. One day, Lecter witnesses a condemned war criminal receiving a sodium thiopental injection to force him to recall details about his war crimes. In an attempt to recall the names of those responsible for his sister's death, Lecter injects himself with the solution while listening to Glenn Gould's recording of the Goldberg Variations. His subsequent flashback reveals that the Pot Watcher had the dog tags of the other deserters when he was killed as the Russians bombed the lodge. The dog tags should still be in the ruins of the lodge.

Lecter then returns to Lithuania in search of the dogtags, as well as his sister's remains. While crossing the Soviet border, he draws the attention of Dortlich, who is now a Soviet border patrol officer. Lecter excavates the ruins of the lodge where his family died, and also unearths the dogtags of the group of deserters who had killed his sister. Dortlich attempts to kill him, but Lecter gets the upper hand and incapacitates him. After he buries Mischa's remains, Lecter ties Dortlich to a tree and forces him to reveal the whereabouts of the rest of his gang. When he refuses to reveal enough details, Lecter decapitates Dortlich with a horse-drawn pulley. Dortlich's blood splashes on Lecter's face and he wipes it off and licks it. Later, the Soviet police arrive on the scene, only to discover Dortlich's head, with its cheeks carved off, apparently made into a brochette.

Lecter then visits Kolnas' restaurant in Fontainebleau. He finds Kolnas' young daughter, whom he notices is wearing Mischa's bracelet. He then gives Kolnas' dogtag to her. Kolnas enters the restaurant, but Lady Murasaki persuades Lecter not to kill him, for the sake of Kolnas' children. Dortlich's murder, along with Kolnas' dogtag, puts the rest of the group in alert, and Milko, now a hitman, is dispatched to kill Lecter. Milko sneaks into Lecter's laboratory at night with a gun, but Lecter senses his presence and knocks him out with an injection. Just as Police Inspector Popil is entering the lab, Lecter locks Milko in the cadaver tank and leaves him to drown in the embalming fluid. Popil questions Lecter about Dortlich's murder, but is again unable to establish Lecter's guilt. Popil then tries to dissuade him from hunting the gang, and offers to let him go free if he helps locate Grutas, now a sex-trafficker. After Lecter leaves, Popil remarks to his assistant that Lecter lost all of his humanity when Mischa died, and has become a monster.

Lady Murasaki begs Lecter not to complete his revenge, but Lecter says that he made a promise to Mischa. Lecter then sets up a time bomb in Grutas' home, and attacks him in the bath. However, a maid alerts Grutas' bodyguards, who then rush in. Just as Grutas' bodyguards are about to slit his throat, Lecter's time bomb goes off and he escapes.

Grutas kidnaps Lady Murasaki and calls Lecter, using her as bait. Lecter recognizes the sounds of Kolnas' ortolans from his restaurant in the background. Lecter goes there and plays on Kolnas' emotions by threatening his children, forcing him to give up the location of Grutas' boat. Lecter then says he will leave Kolnas alone for the sake of his family, and places his gun on the hot stove. As Kolnas goes for the gun, Lecter impales him through the head with his Tant. He then hides the Tant behind his back.

Lecter goes to the houseboat. Just as he is about to untie Lady Murasaki, Grutas shoots him in the back. Grutas then proceeds to molest Lady Murasaki. Lecter takes out the Tant, which was broken by the force of the bullet, and slashes Grutas' Achilles' tendons with it, crippling him. In a final confrontation, Grutas claims that Lecter too had consumed his sister in broth fed to him by the deserters, and he was killing them to keep this fact secret. Enraged, Lecter slowly carves his sister's initial, M, into Grutas's chest. Lady Murasaki, disturbed by his behavior, flees from him even after he tells her that he loves her. As she leaves, Hannibal bites off Grutas' cheeks in what will become his signature attack. The houseboat is then incinerated, but Lecter, assumed to be dead, emerges from the woods. The film then concludes with Lecter hunting down the last member of the group, Grentz, in Canada, and after killing him, moves to America.

Retrieved from "https://hannibal.fandom.com/wiki/Hannibal_Rising_(film)?oldid=27470"
Community content is available under CC-BY-SA unless otherwise noted.