Paul Momund was a character in Hannibal Rising. He was a butcher that ran his own deli, however he was also a Vichy (a collaborator with the German occupation). Due to his disrespect for women and the Japanese, he became Hannibal Lecter's first victim after he insulted Murasaki.

Some time after Hannibal arrived at his uncle Robert Lecter's estate, he grew a bond with his aunt Murasaki and the two trained diligently while honoring her great ancestor's ways. The two took a trip to the market, where Paul was working on a slab of meat until he spotted Murasaki. He began lobbing obscene gestures at her (calling her "la japonaise" among other terms), to which she ignored while Hannibal took notice of the man's rudeness. She eventually walked passed him only for Momund to smack her bottom and question if "Japanese pussy ran sideways". Hannibal, in response to this vulgar display, assaulted the man and beat him viciously with a meat tenderizer. He was eventually brought in by the police, who let him go due to Paul being a much hated man (with his Vichy connections).

Later, Hannibal desired to kill Momund and took with him a katana that belonged to Murasaki's ancestor. He tracked Paul to a secluded pond that he was fishing at, where Momund caught a spectacular fish and returned to shore. He spotted Hannibal sitting alone, who proceeded to state that Momund owed a certain lady an apology. Momund mocked Hannibal, instead threatening to throw him in the river for coming here. He then pulled out a knife and threatened mutilation and even rape. Hannibal inquired simply on what Momund said about Murasaki's "pussy" - in which way it ran. Momund smirked and claimed it ran sideways, before insulting him further, which led Hannibal to take out the Katana slashing crossways across his stomach before grinning.

He held the sword firmly while Momund attempted to keep his wound closed. Hannibal circled him, cutting every which way across his body (a slash to the arm, along his back and down one of his legs). As he knelt over a tree stump, Hannibal continued to chastise him for what he was...then took out his drawing to show Momund's future. On it, Momund's head was on display with a tag attached stating his own deli. He began to scream frantically as Hannibal walked about and span, to slash downwards and decapitate the butcher in one swipe.

His head was placed on display in the town square, with Murasaki carving a swastika on the forehead. Momund's head was missing the cheeks, as Hannibal had removed them and eaten them. Murasaki was disturbed by the sight but careful not to mislead Hannibal, talked calmly and said that he did not have to do that for her. Shortly after, inspector Pascal Popil arrived to interview the two in regard to Momund's murder. Hannibal was freed after he proved to be unreadable, even passing a polygraph test. This killing would the first of many in Hannibal's life 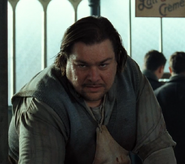 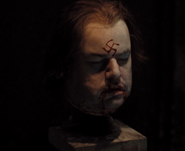 Add a photo to this gallery
Retrieved from "https://hannibal.fandom.com/wiki/Paul_Momund?oldid=27578"
Community content is available under CC-BY-SA unless otherwise noted.