Edit
watch 01:36
We're Getting Mutants in the MCU - The Loop
Do you like this video?
Play Sound

David Slade
"Potage" is the third episode of Season 1, and overall the third produced hour of Hannibal. It originally aired on April 18, 2013.

Under Jack Crawford's authority, Alana, Will and Hannibal take Abigail back to her home in Minnesota. While they are there, the copycat strikes again and a suspicious man stalking Abigail for her father's crimes, goes missing.

In the past, Abigail Hobbs is hunting with her father who is teaching her to shoot, something she looks very unnerved in doing, but she kills a deer and her father congratulates her. They return to the cabin with the fresh kill and Hobbs teaches her how to field dress the deer.

Alana visits Will's home and gives him the unexpected news that Abigail has woken from her coma. Jack wants Will to visit Abigail and question her about her involvement in Garret Jacob Hobb's murders but Alana suggests to Will that she visit Abigail first since neither Hannibal nor Will could look at Abigail objectively since they saved her life and were witness to the death of the rest of her family with Will having killed Abigail's father. Alana visits Abigail in the hospital, and though she finds Abigail willing to talk, Abigail is very careful about what information she lets on about. Noticing this behavior, Alana discusses it with Jack and Hannibal. Jack's firm belief is of Abigail being an accessory to her father's murders. The victim's families are demanding answers and he will not sway against her guilt. With Alana or Hannibal unable to change his view, Will is sent to get another opinion on Abigail's state of mind.

Back in the hospital, Freddie Lounds is visiting Abigail and is seeking direct information about The Minnesota Shrike. Though she makes an attempt to appear as a friend, Abigail's caution keeps her from learning anything. As Freddie begins a warning to Abigail about Will, both he and Hannibal enter the room. Freddie attempts to leave her card in case Abigail wants to contact her but Will snatches it from Freddie's hand disdainfully. Once she leaves, Will asks Abigail if she remembers either of them. She recognizes him as the one who killed her father and Hannibal notices the discomfort that confrontation has on Will and offers that Abigail go for a walk.

Will and Hannibal leave the hospital grounds, only to find Freddie waiting against the bumper of Hannibal's car. She offers to rescind her words of slight against Will to Abigail if he gives her help on the Shrike case. He refuses outright, leaving her with the loathing filled recording "It's not very smart to piss off a guy who thinks about killing people for a living" which she gladly takes straight to her website.

Jack is not pleased when they return to his office and find him reading the article but is particularly displeased that Hannibal allowed Will to say something that worked directly against him. Hannibal, however, calmly says he trusts Will to speak for himself. Though the article wasn't about Abigail, Jack is still unamused by the content and that more importantly, Abigail wants to return home, but there are conflicting opinions on whether that would be healthy for the still recovering girl. On Hannibal's suggestion, Jack approves of bringing Abigail home—after all, it serves his own agenda of wrapping up the case.

Freddie Lounds continues to involve herself in the case. She has come into contact with Nicholas Boyle, the unhappy brother of the recently murdered Cassie Boyle, the copycat's first victim. Freddie informs him that Abigail has woken from her coma and he takes in that information with an expression of hate.

Alana, Will and Hannibal escort Abigail back to Minnesota but the first thing that comes into view is the word "CANNIBALS" in black graffiti spray painted along the entire garage door. As Abigail recounts her mother's death and other memories of the crime, the three follow close behind and answer questions as she asks them. On arrival in the kitchen, Will and Alana ask Abigail about that final phone call she answered before her father died and Hannibal watches from a distance, silent. Abigail does not remember the voice on the other end, presumably that of the copycat killer. As they move throughout the living room, now looking through boxes of her and her family's evidenced belongings, Alana offers Abigail insight on Folie à deux. Hannibal adds that one cannot be delusional if the belief in question is accepted as ordinary by others in that person's culture or subculture and Abigail recounts that her father was not delusional, he was a perfectionist. Will mentions there was hardly any evidence left behind. This stops Abigail and she asks if that's the real reason that they came back to Minnesota but Will answers it was one of many considerations. Abigail asks if they are going to re-enact the crime, Alana as her mother, Will as her father and Hannibal as the man on the phone but before the situation can escalate, Abigail's friend Marissa Shurr comes to visit.

They walk out into the yard and talk about the neighborhood, school, the news and the accident. Marissa was not with many in the opinion that Abigail played a part in her father's crimes and as she attempts to reassure Abigail of this, Nicholas Boyle comes out of the woods and begins harassing Abigail. Marissa throws a rock at him and as Will and Hannibal rush out of the house at the noise, Nicholas spits on the ground and flees back into the woods. Marissa's mother arrives to take her home and obviously displeased, Marissa calls her a bitch, which Hannibal takes note of. Both he and Will go into the woods in search of Nicholas Boyle, but Hannibal seizes on the opportunity to hide the rock under leaves.

Will, now with more knowledge of the crime, has another nightmare as Garret, intent to end Abigail's life. He kills her and wakes, drenched in sweat.

This time with a police escort, Alana, Will and Hannibal go with Abigail to visit Garret Jacob Hobbs' cabin. Abigail recounts the ways in which he handled the breakdown of the deer he killed, nothing ever wasted and that in Hobbs' view, this wouldn't be murder. Blood drips onto Abigail's forehead from above and Will goes up the stairs into the loft, finding Marissa impaled, hanging on a rack of antlers..

Jack arrives on the scene, clearly unhappy at the turn of events. Abigail and Alana remain outside the cabin as Will and Hannibal examine the body. Jack enters, confronting Will about the suspicious circumstances now occurring since Abigail left the hospital and Will remarks that whoever did this was the same person who killed the girl in the field—the copycat killer, making Nicholas Boyle the prime suspect as he was the first victim's brother and had the altercation with Marissa outside of the Hobb's residence just hours before.

Jack asks Hannibal to escort Abigail out of Minnesota and Hannibal concedes. On arrival to the Hobb's house to collect Abigail's things, they find news crews surrounding the residence. As they pass the police tape and start walking toward the house, Marissa's hysterical mother breaks past a policeman but before she can attack Abigail, Hannibal catches her and she wails in his arms. As the policeman regains his hold on Marissa’s mother, Freddie steps out of the shadow of the house and gives another try at attaining Abigail’s take on the story. Another policeman takes her arm to escort her out, and over her shoulder she informs them offhandedly that there might be others lurking around the premises. Hannibal follows her, and asks Freddie, without naming anyone, if she saw anyone matching the description of Nicholas Boyle. Freddie offers the information, in exchange for information on behalf of her own ends, amusing Hannibal.

Inside the cabin, Abigail is distraught. She is back in the living room, recalling the words of her father as she hugs a pillow. As his words “None of her is gonna go to waste” go through her mind, she has an epiphany and cuts open the pillow she was just holding to reveal human hair. Before she can scream, she notices Nicholas Boyle standing a few feet away from her, inside the house.

Nicholas attempts to assure her that he's not going to hurt her and tries to explain that he didn't kill Marissa but Abigail doesn't believe him and makes a run for the door. Nicholas desperately chases after her, and as he grabs her and turns her around to explain himself Abigail panics and sticks the knife into Nicholas' sternum, killing him.

Alana is upstairs and calls down to Abigail. Hannibal spots her first, noticing a stunned Abigail walking toward the steps with blood covering her hands. As Alana comes around the corner, he goes behind her and knocks her out against the wall. He assures Abigail that Alana will be all right, then calmly asks her to show him what she's done. She does and Hannibal knows she'll never convince someone it was self defense. The narrative that will most assuredly play out if anyone finds out about Abigail's crime is that she was an accessory to all the previous murders, horrifying her. Seeing a step he could take to win Abigail’s trust, Hannibal offers to help her hide the body.

In the ambulance, an amnesiac Alana has woken up with Will and Jack are there. Jack informs her of what happened, recalling an incorrect narrative dictated to him by Hannibal- Boyle attacked Abigail and then knocked out the others before escaping before anyone could find him.

Back in his office, Hannibal sits at his desk writing notes. When Abigail arrives. She asks how he knew, and he tells her the hospital called to inform him she climbed the wall. She is clearly overwhelmed by her murder, and he acknowledges her distress, asking her to come down, and she does. She confronts him about the call to the house as she has deduced it was him. He deflects her assertion but promises he'll keep her secret and in turn, she promises the same. 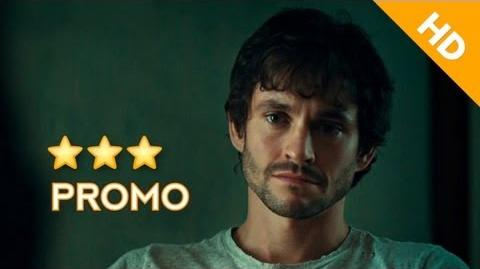 Hannibal is not shown cooking or eating at all in this episode even though he makes at least one kill where organs could have been taken for himself or as part of the copycat murder.