Guillermo Navarro
"Rôti" is the eleventh episode of Season 1, and overall the eleventh produced hour of Hannibal. It originally aired on June 6, 2013.

When Dr. Gideon escapes from police custody, he seeks to kill psychiatrists who have profiled him. Will and the BAU team try to track him down by following Freddie Lounds' blog before Gideon can get to Alana. Hannibal misleads the BAU team in order to put Will in the same room as Gideon, and Jack questions Dr. Chilton regarding Gideon's escape.

Dr. Chilton has been accused of psychic driving by his patient Gideon; it seems the killer is directing blame on his handler for convincing him he was the Chesapeake Ripper. Over dinner, Dr. Chilton wonders aloud to Hannibal if this will mark the end of his career - a very public court date is pending. In his home, Will has a nightmare that he's drowning in an oceanic expanse; the caverns of his mind have revolted against him. Later, Dr. Chilton oversees Gideon's transportation from cell to armored truck as his patient is taken to his court hearing.

Jack and Will are called to the scene when Gideon escapes the armored car. Will closes his eyes and enters the

moment of the crime. He sees himself sitting in the vehicle, as Gideon stares at two guards. Will realizes Gideon wriggled one hand loose and then masterfully executed his two captors in a hectic brawl as the truck barreled down a backcountry road. Once both guards were killed, the driver stopped, and Gideon pounced when the back door opened. Beverly says Gideon's footprints point back to Baltimore, and Will wonders what the madman's motivations are; the organs of his victims are carefully hung on a nearby tree, but if he were the true Chesapeake Ripper, organs would be the last thing Gideon would leave behind. Will thinks Gideon is aiming for the Ripper's attention.

Dr. Gideon's escape is a bullet dodging in a way for Dr. Chilton; he escapes a high profile, and severely damaging court case. Will and Alana visit him in his office to ask about Gideon's getaway. It's unlikely, but they can't rule Chilton out as a potential suspect just yet. Chilton tells Alana much of this fiasco's blame lies on her shoulders, as he thinks she introduced the idea of psychic driving on Gideon. Chilton still maintains Gideon is the Chesapeake Ripper, although Will and Alana insist that's not important at the moment. Nevertheless, Dr. Chilton worries Gideon is out to prove he's the Chesapeake Ripper once and for all now that he's on the lam.

Will visits Dr. Lecter to talk about his deteriorating mental health. Will fears he is going crazy and says he doesn't

know who he is anymore. Perhaps Gideon is feeling the same thing. Hannibal thinks Dr. Gideon may want to find the real Ripper so he can gauge who he is; Will doesn't have to do something drastic like that... Hannibal is his gauge. Later, in forensics, Beverly tells Will that Gideon scrambled the brains of his victims. Will sees it as a symbolic gesture in retaliation to the suits that "scrambled" Gideon's brain. Will guesses Dr. Gideon will begin emulating the Ripper's previous murders and fears Alana Bloom might be a possible victim.

Will enlists an armed guard to protect Alana until Gideon is brought back into custody. Alana, flirting, tells Will it's too bad he isn't the one guarding her, as she would've enjoyed cuddling up by a fire with him and his dogs. But Will knows that can't happen until his mental health is recalibrated. Alana and Will discuss Gideon's motivations. Will thinks Gideon will kill to get the Ripper's attention, but Alana fears the Ripper won't be happy with a copycat stealing his spotlight. If Gideon meets the Ripper, it probably won't end well for him.

Elsewhere, Freddie Lounds gets a call from psychiatrist Paul Carruthers, who happens to be looking for a cowriter

on a new article for the Journal of Abnormal Psychology. Carruthers arranges a meeting with Lounds to discuss the project, but when she shows up at Carruther's office, Freddie finds Dr. Gideon standing over the doctor's body, having drained his body of its blood and attached his tongue to his neck. When Will and Jack get to the scene of the crime, they realize Gideon is peacocking for the Ripper. Will notices the victim has a computer mouse in his hands, and when Will moves it, Freddie's website pops up on a nearby screen. She already has an article up about the crime, with photos from the scene. There's only one way she could've obtained those photos... Gideon has Freddie.

Gideon has Freddie Lounds under his watch in the observatory where the Chesapeake Ripper waved Jack Crawford's trainee's arm around his head like a flag. Gideon wants Freddie to help him lure the Ripper to them with her writing. Meanwhile, a psychiatric attending at Western General shows up dead in the same fashion as Dr. Carruthers, except this latest one's arm is missing. Will knows this wasn't Gideon - this was the Ripper, and he's sending a message. Where was the last place they saw a severed arm? Jack immediately knows the answer. The Ripper is pointing them to Gideon as a means of retribution for imitating his genius.

In the observatory, Freddie watches in horror as Dr. Gideon operates on his newest victim, a still conscious Dr.

Chilton. Chilton is heavily drugged, yet terrified of Gideon's intentions. Gideon calmly tells his old psychiatrist that he'll be using Chilton's body to make a gift basket for the Ripper - full of Chilton's vital organs. When Will and Jack make it to the observatory, Jack runs in with SWAT, but Will is distracted by his recurring stag hallucination. He follows the figment of his imagination into the woods. Inside, Jack finds Freddie Lounds standing over Chilton's body, keeping him alive. Chilton holds all of his organs in his own hands. Jack calls for medics, and from a distance, Gideon watches everything before disappearing into the night.

Gideon gets into his getaway car, but Will Graham is in the back, already pointing a gun at him. Will is struggling through hallucinations but manages to take Gideon to Hannibal's house, where he sits the murderer at the dinner table while he converses with Lecter. Will begins to have a psychotic episode, and Hannibal assures him he came over alone; there was no Dr. Gideon with him. Will begins to sob. What is happening to him? Will's condition worsens as he has a minor seizure. As Will goes out of it, Hannibal calmly sits down and addresses Dr. Gideon, who has been sitting there all along. Hannibal doesn't appreciate him stealing the Ripper's identity, yet still offers up Alana Bloom's location, if Gideon would like it...

When Will comes to, Hannibal is standing by his side. Hannibal lets Will know he had a minor seizure but is

otherwise fine. His hallucinations have spiked, but he'll be okay. Dr. Lecter prepares to leave on the news of Dr. Chilton's critical condition, saying he's worried Alana may be next. Hannibal insists Will call Jack so he can go to the hospital, but when Dr. Lecter leaves the room, he purposefully "forgets" the gun and keys on the table. When Hannibal comes back, Will is gone, desperate to protect Alana. What Will doesn't know, however, is that he's walked right into Hannibal's trap.

Gideon watches Alana Bloom as she moves about her apartment. He is calculating and eerily calm for a man about to commit a heinous crime. In the distance, Will Graham approaches, hanging on to his psyche by a thread, but determined to save Alana. As Will approaches Gideon, the two share a conversation. Gideon wonders about who he is - he doesn’t know anymore, to be honest. But Gideon thinks he and Will have become one in the same. Gideon taunts Will, telling him he can't be with Alana when he's stuck in his own head. Will shoots Gideon in the head, having reached a breaking point. Off the gunshot, Alana runs out of her apartment to find Will huddled over Gideon's body.

As Will recovers in a hospital bed, Hannibal meets with his own psychiatrist and speaks about his obsession with

Will's mental health. Will is losing his mind, and Hannibal sees it as an oil spill he needs to contain. But, Hannibal's psychiatrist ponders the source of Hannibal's obsession. What is at the root of his interest in Will? Hannibal thinks he sees Will as an opportunity for a friend. But his psychiatrist warns him - Dr. Lecter must resist that urge if he wishes to remain Will Graham's professional therapist. 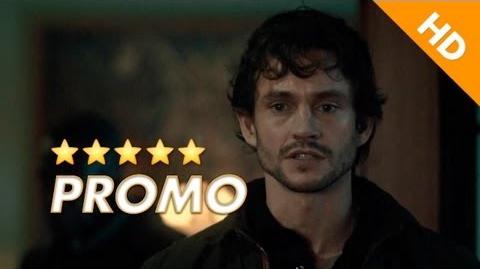