"Relevés" is the twelfth episode of Season 1, and overall the twelfth produced hour of Hannibal. It originally aired on June 13, 2013.

After Georgia Madchen dies in an explosion, Will asserts that the copy cat killer is still alive. The BAU team links Abigail to the Minnesota Shrike victims and plan to arrest her only to find Will has checked her out of the hospital. Will's hallucinations intensify, causing him to lose Abigail in Minnesota. Meanwhile, Hannibal's subtle manipulation convinces Jack that Will is capable of murder. Hannibal makes an astonishing admission to Abigail.

Late at night, Will wanders the halls of the hospital and visits Georgia, the psychotic girl who was suffering from jaundice. She looks better now, as does Will. But, Georgia warns Will about the doctors; they will never understand what's "wrong" with him. They'll have multiple treatments, but deep down, they never know.

Hannibal visits Will. Together, the two talk about his hallucinations and loss of time. Hannibal is worried Will has something more than just a fever. Will may have dementia. When Hannibal asks about Georgia, Will says he doesn't think she wants to recover. Who could blame her? In her incubator, Georgia combs her hair, and a spark ignites the heavy oxygen surrounding her. She bursts into flames and dies.

Jack and Will examine Georgia's charred body. She wasn't wearing her anti-static shock bracelet, which leads

Jack to assume it was a suicide. But Will knows Georgia wasn't suicidal. Jack warns Will not to side with an accused murderer.

Elsewhere, Freddie Lounds discusses the structure of her book with Abigail Hobbs. When Freddie says she wants to call the book "The Last Victim," Abigail resists, citing Marissa Schurr as the last victim, blaming her father even though the copycat killed Marissa as well as Cassie Boyle. Freddie asks if she blames her father for the death of Nicholas Boyle, but Abigail responds that she blames Nick himself for his death, deserving it for killing Marissa. Freddie doesn't think he killed Marissa; having interviewed many killers as well as Nick she thinks he was innocent but Will Graham and Jack Crawford are to blame for his death as a result of accusing him. Abigail keeps silent about her secret regarding Nick, allowing Freddie to focus on Will Graham, who (unlike Boyle) gave off a killer's "very specific brand of hostility". Regardless, whoever killed Nicholas Boyle killed an innocent man. The words bite at Abigail like knives.

Will checks himself out of the hospital and marches immediately over to Jack's office. Georgia Madchen was murdered; and considering she was misunderstood her entire life, Will wants to make sure no one misunderstands her death. It wasn't suicide. In forensics, investigators find a plastic particle in the ashes, and Will wonders if a mysterious killer placed a plastic comb in her incubator to initiate her death. Going back to "Georgia's" murder, Will realizes her final killing was just slightly off with her earlier ones... much like Garrett Jacob Hobbs' copycat. Suddenly, it all makes sense - Georgia's killer is the same person as Hobbs' copycat. It wasn't Nick Boyle after all. Jack is far from convinced. In fact, he's worried about Will's mental well-being.

Jack goes to Dr. Lecter for information about Will. What is Will's relationship with Abigail Hobbs at the moment? Jack wonders if Will's perceived debt towards Abigail has flooded over into the criminal. But Hannibal suggests otherwise - in the time he's known Will, Lecter's never got the sense of criminality from him. In fact, Hannibal is interested by Will's new theory, as he is Hobbs' copycat and responsible for the murder pinned on Georgia. Will is searching for Hannibal; he just doesn’t know it yet. Jack isn't completely satisfied with his conversation with Hannibal, so he visits Dr. Du Maurier to speak with her about one of her patients...

Jack has reason to believe Hannibal Lecter is withholding evidence regarding an ongoing murder investigation and questions Hannibal's psychiatrist about the case. She doesn't offer up much pertinent information, though she does admit to being attacked by one of Hannibal's referred patients. Jack notes Hannibal suffered through an attack of his own a couple weeks ago, though that one left the patient dead. Dr. Du Maurier doesn't know if Hannibal's helping Will cover up a crime, but she agrees with Jack that Hannibal is a fiercely loyal friend. In her opinion, Will Graham would be better off with more people like Dr. Lecter in his life.

In forensics, Jack talks to Brian Zeller and Jimmy Price about the Hobbs copycat. Will seems to think the copycat had direct access to Garrett Jacob Hobbs. Jack wants Brian and Jimmy to find out everything they can about Garrett's final days, any connection they can conjure up that might lead them to a new suspect in the copycat case.

Elsewhere, Abigail tells Will she knew she was different when she killed Nick because it felt good to her. Will tells Abigail that killing her father was empowering. He also tells her he might have a lead on her father's copycat... but he's going to need her help.

Hannibal meets with Dr. Du Maurier in her office. She tells Hannibal about her encounter with Jack Crawford. Jack seems to think Hannibal is protecting Will - who in turn is protecting Abigail from the crime she committed against Nick. Hannibal is simply protecting a friend, but Dr. Du Maurier says he can't be friends with someone who doesn't understand the concept of the term... especially since Hannibal himself doesn't know the concept of the term. When Dr. Du Maurier mentions Jack's questioning about her attack, Hannibal becomes more interested. She calms him down though, assuring him she only gave half-truths. Jack knows her assailant choked on his own tongue... but he doesn't know Hannibal caused it to happen.

Will meets with Hannibal to discuss his inclinations regarding Hobbs' copycat. Will doesn't realize he's talking to the copycat at that very moment; nevertheless, he details how Dr. Sutcliffe's murderer must not have intended to pin the crime on Georgia Madchen. She wasn't supposed to be there... no, the murderer intended to frame Will Graham. Hannibal wonders if Will thinks the copycat has something personal on him. Will doesn't know, but plans to bring Abigail back to her home so they can retrace the events following Nick's death from the beginning. Hannibal, for obvious reasons, hates the idea.

Brian Zeller and Jimmy Price report their findings to Jack Crawford. Abigail Hobbs was registered for orientation with her father at every location the murdered girls were abducted from; she was the bait her father used to lure girls in. Off of this revelation, Jack surmises - wrongfully - that Abigail murdered Dr. Sutcliffe and Georgia Madchen because she has a thirst for murder that can no longer go unquenched. When he goes to arrest Abigail, however, he's met by Freddie Lounds. She lets Jack know Will Graham snuck her out of the facility very recently; a tidbit she finds very interesting, considering Will is her legal guardian.

Jack storms into Hannibal's office looking for Will. Crawford is furious with Dr. Lecter's recent handling of Graham, but Hannibal defends his work - he was too busy trying to figure out if Will had a dissociative disorder or if Jack's insistence on Will being in the line of fire was the source of his mental instability. Hannibal utilizes the opportunity to manipulate Jack. Lecter plants the seeds of Will's culpability, mentioning how Graham was the last person to see both Dr. Sutcliffe and Georgia Madchen. Hannibal wonders if Will's mind is slowly dissociating and ultimately becoming Garrett Hobbs. Jack knows Hobbs tried to kill his daughter and panics because Will is currently with Abigail. As Jack rushes out of the room, Hannibal's demeanor abruptly changes as the door latch shuts.

Will takes Abigail back to the cabin where her father killed all of his victims. It's there that Will finds out Abigail was the bait by which her father lured in all the girls he murdered. This shocking revelation taints the image Will has of Abigail and sends him into a psychotic episode. Will begins to struggle with reality and hallucination, until he wakes up on an airplane, back in Virginia. He's the only one left. Abigail is nowhere to be found.

Abigail wanders into her old home, having left Will at the cabin because he was acting unstable. Hannibal is waiting for her in the kitchen. Once he heard of Will's intentions, he immediately came to her aid. Hannibal tells Abigail Jack knows about her involvement in her father's murders and apologizes for not being able to protect her in this life. Abigail asks Hannibal why he called her father the day her father was shot by Graham. Lecter says he was curious what would happen. He admits to being the copycat and tells Abigail he's killed far more people than her father ever did. Terrified, Abigail asks if Hannibal plans on killing her too. He rubs her face and he apologizes that he could not protect her in this life. 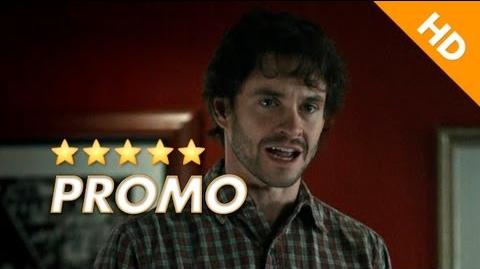 Hannibal brings Will a Tupperware container of amaranth porridge garnished with cruciferous vegetables, legumes and grains.

Retrieved from "https://hannibal.fandom.com/wiki/Relev%C3%A9s?oldid=27276"
Community content is available under CC-BY-SA unless otherwise noted.