David Slade
"Savoureux" is the thirteenth episode of Season 1, and overall the thirteenth produced hour of Hannibal. It originally aired on June 20, 2013.

When Will returns from Minnesota without Abigail, Hannibal turns Will in, and Jack and the BAU team find strong evidence of Will having killed not only Abigail, but possibly being the Copy Cat Killer. Jack and Alana begin to accept that Will is indeed capable of murder. Will is arrested, plans a desperate escape, and takes Hannibal back to Minnesota to clear his name and prove he's being framed. But before he can, the situation takes another ugly and unexpected turn.

Will Graham is slipping into a state of dementia where he can no longer differentiate between reality and hallucinations. Will tells Hannibal he took Abigail to Minnesota, but didn't come back with her and now Will has no idea where she is. Together the two go back to Minnesota, where Hannibal "finds" an ear in the kitchen sink and says they can't run from this problem- they'll have to call Jack.

Upon coming forth, Will Graham's entire professional life comes to a halt when Jack Crawford makes the

decision to book him on suspicion of murdering Abigail Hobbs. The FBI takes in Will, his house is searched and inspected, and Beverly Katz takes samples from underneath Will's fingernails. It's hard for her to do - and impossible to do so without addressing the elephant in the room. She can't act like she doesn't know Will however Will himself doesn't even know who he really is anymore.

When she hears about his arrest, Alana Bloom is furious, especially with Jack as she warned him repeatedly about the effects these investigations would have on Will's psyche, that he was fragile and needed to be treated with care, but instead Jack showed him disregard. Crawford says he trusted Hannibal's advice, and he is surprised as anyone to find out Abigail's blood is on Will's hands. Alana corrects Jack - Abigail's blood is on all of their hands, and so is Will's.

Alana speaks to Will in an interrogation room. Will tells her she dodged a bullet romantically, but that's not how Alana sees it; instead, she is deeply wounded. She tells Will she'll look after his dogs until this clears up, no matter how long that will be.

As far as the investigation goes, she has to schedule a few psychiatric tests on him, which Will interprets as just some more "clock drawing" bureaucracy. When Alana hears about Hannibal's personal tests on Will and he assures her he passed them all, she asks Will to draw a clock for her. Will agrees, and as before, the numbers are all on one side of the clock only. Alana realizes something deeper is going on, and when Will says drawing clocks isn't his problem, she agrees it's the least of his problems.

In Dr. Du Maurier's office, Hannibal puts on an fake act about mourning Abigail's loss. Dr. Du Maurier recommends Hannibal stay away from Will during and after his murder case, as rehabilitation efforts might be harmful for Dr. Lecter, considering his connection to Abigail. Hannibal regrets his inability to save neither Will nor Abigail.

house all contain traces of the copycat killer's victims, and it appears as if Will Graham is a serial killer, who was taking souvenirs to commemorate each kill. Alana thinks that's impossible; there is something wrong with Will physically, but he's not a serial killer.

Jack meets with Will in the interrogation room and tells his former partner about the fishing lures. They had traces of the copycat killer's victims woven into them, and at this point, the evidence is a mile high against him. Will understands he's losing his mind, but he begins to wonder if someone is setting him up. If that were the case, they'd have to have an intimate knowledge of each investigation; it could even be Jack himself but Crawford sits down and reads Will his Miranda rights, officially placing him under arrest. In the transport towards county jail, Will breaks free and attacks the guard riding next to him.

Will is on the run, and Hannibal sits down with Jack and Alana to discuss his escape. When Alana mentions her

clock test, Hannibal produces a fake one of his own, supposedly taken a few weeks ago, except this one is flawless. Jack thinks they have a full-fledged psychopath on their hands. Later, in his office, Hannibal encounters Will, who is hiding on his balcony. Will tells Hannibal he could've believed he killed just Abigail, but when he got accused of all the copycat killings, he knew he was being set up. Playing along, Hannibal says they'll have to act as if he did commit the murders and then disprove the theory.

One by one, Hannibal walks Will through each of the copycat murders, considering ways in which he could have carried out each crime. Will resists, sure of the fact that he didn't kill any of these people, but Hannibal presses onward, saying that perhaps Will got so far into the minds of these killers that he ended up becoming one himself. Ending on Abigail, Will asks Hannibal to take him back to Minnesota, back to where Abigail died.

Jack and Alana visit Dr. Du Maurier to ask if she's seen Hannibal recently as he missed his morning appointment and would usually consider it rude not to call ahead. Jack fears Will took Hannibal to Minnesota to kill him. Meanwhile, in Minnesota, Will begins to put the pieces all together, that every time he was around the copycat crime scenes, Hannibal was by his side. In the Hobbs' household, Will has a revelation that it wasn't him that killed all these people, it was Hannibal. Will pulls a gun on him, now aware he's in the presence of a serial killer.

Hannibal remains calm and asks Will what his motivations possibly would be to carry out all these murders, but Will is on to him; he knows the lack of motivation is exactly why it was so hard to find Hannibal in the first place. Hannibal is a psychopath and just wanted to see how Will would react if he carried out these crimes. Hannibal wanted just to wind Will up and let him go, to see where he'd end up. Will tells Hannibal this is how he goes but at the very last second Jack Crawford walks in and shoots Will in the shoulder, ensuring the safety of Hannibal from Will's "murderous" ways.

Jack and Hannibal watch over Will in his hospital bed. Jack tells Hannibal he's seen people be affected by cases

before, but never like this and Hannibal concedes no one in the room will ever be the same moving forward. Later, Hannibal meets with Dr. Du Maurier over dinner, where she tells him his propensity for violent patients might be something to avoid in the future. When Will makes his full recovery, he is placed in a maximum-security cell pending trial, and Hannibal pays him a visit. In his eyes, he has won. 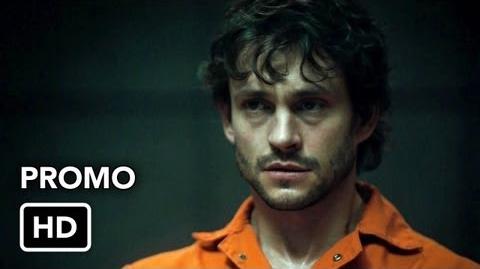